Do me a favor. This is going to be good: flip what you're listening to from your usual station, podcast, streaming channel, or video platform. Find something new that you don't know a lot about. Settle on a song or audio clip of something completely unfamiliar to you and listen thoroughly. Close your eyes. Let the audiophile in you take over ...

What mental image did you conjure up to match your auditory experience? The singer, the band, the podcast host ... how did these individuals take shape in your mind? Now, further explore and find the actual visuals that accompany the sound. Look up the bios or Google images. Now, what differences or discrepancies did you note between your audio-only thought processes and the actual visual itself?

Which of these images meant more to you? The one you were allowed to create yourself, or the one you were given by the photographic proof? Welcome to the power of theater of the mind.

How Theater of the Mind Makes the Best Radio Ads

I know the first time I met a radio personality in person, I was somewhat caught off guard because I had this idea in my head of what they looked like based on the sound of their voice. Meeting them in person destroyed that mental image I’d grown somewhat attached to over the years. 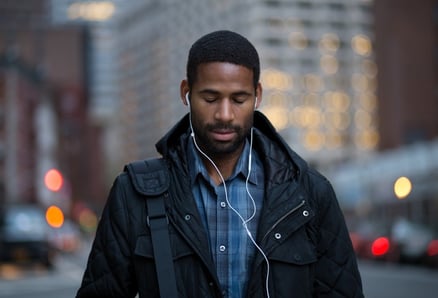 Radio is the only medium in existence that fully utilizes its power. Every other media out there relies on some form of visual stimuli, like television or magazine ads, to online banner ads or social media posts.

From a psychological standpoint, echoic messages – those that come into our brain through our ears – are more memorable because we’re allowed to create our own visualizations of those sounds. We can use our personal experiences, memories, and unique vantage point in life to create a scene in our mind that relates most vividly to us.

Even though echoic memories last longer than iconic (visual) memories, they still need to be moved into long-term memory. This is why dramatization of your message and having a dominant frequency are crucial elements of an effective radio campaign.

Go ahead and visualize the scene being played out in this fictitious radio script:

Where is Main Street in your mind? What’s the gender of your hot date? What color is their hair? Their eyes? What are they wearing? What are you wearing? What does their voice sound like? Where are you going? Where did you come from?

All of those questions you were allowed to answer for yourself because they were not presented to you visually – as would be the case if it were a television commercial or magazine ad. Your answers to those questions came from your own wealth of life experiences. Pretty powerful, right?

… pay attention to the scene that unfolds in your head. Then, think about what in your life made it play out that way. In conversation ads, the people involved are most likely going to resemble what you as a person value most. You’ll put a face to the voice of the announcers, and that face will be conjured up to be whatever is most appealing to you. Someone else will have a completely different idea of what that announcer looks like. But that’s okay because theater of the mind is working for both of you just the way it was meant to.

The results were identical. 57% (fifty-seven percent!) of participants from each group correctly identified the brand even though it wasn't presented to them. These results were consistent through several more tests using different brands.

This means consumers don’t actually need a visual stimulus to effectively think of your brand. In fact, on average across all brands in the study, 71 percent of participants identified brand triggers as being auditory in nature. Not visual.

4. Radio Works for Everyone

Veteran radio advertisers already know this. It’s one of the many reasons they’ve stuck with radio for so long, and why the best radio ads are the ones that leverage theater of the mind to its fullest.

Local radio advertisers have the added benefit of using their knowledge of the community to help get your mental picture started with relevant context. Using the above example, instead of Main Street, it would be Downtown St. Cloud – a place everyone in the city is familiar with. In Grand Forks, it could be the Ralph Engelstad Arena where the Fighting Hawks play hockey – leveraging the immense team pride of the area.

The only limit here is your imagination, which is why using a skilled radio copywriter is highly advised if you want to paint the perfect picture of your brand in the minds of your potential customers.