Continuing education is one of Leighton Broadcasting's core values. We believe that to remain some of the best in the business, we must "sharpen our swords," as often as possible. You'll often find our employees seeking out new continuing education opportunities - like Rising Through the Ranks, a radio management course that takes place annually, in Nashville, TN. This year, Kalie Schuster and Amy Foxx were selected as scholarship recipients for the RTTR program - two very deserving, dynamic, bright women within the Leighton Broadcasting radio family.

Successful people are always looking for ways to help others or a way to lift someone else up. Amy Foxx and Kalie Schuster both have a deep passion for bettering themselves and bettering our company. That’s what the RTTR program is all about – raising one another up so we can be stronger as individuals and therefore, as a team. I am excited to see the impact they will make with their newfound knowledge and confidence gained through the Rising Through the Ranks Management course. 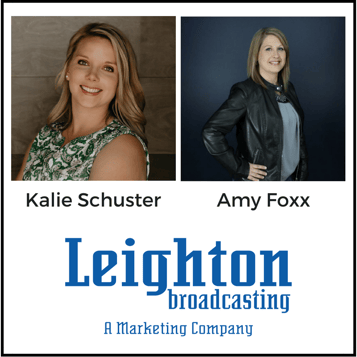 Rising Through the Ranks, now in its 11th year, is an annual women's radio training seminar spearheaded by The Radio Advertising Bureau (RAB), in conjunction with Broadcast Music, Inc. ® (BMI) ®, and the Mentoring and Inspiring Women in Radio (MIW) Group.

This is a creative and robust program that supports women in radio sales management as they advance through the ranks of the radio industry. The curriculum encompasses various topics from budgeting and forecasting, to hiring, recruiting, and even handling tough workplace situations. It's a pretty stringent selection process that involves a board of directors and a rubric for selecting scholarship winners; there were 29 women who graduated from the program in 2018.

Amy Foxx has been in the radio business for 20 years. A graduate of Brown College, she remembers an early point in her education being told she'd be great at a career in radio. Her first official job was with Seehafer Broadcasting in Wausau, WI as a co-host of the morning show "Bob and the Foxx". A native of Monticello, MN, Amy grew up listening to KCLD and when an opportunity was presented to join Leighton Broadcasting in the fall of 1998, she joined the company.

After a three-year stint with Hubbard Broadcasting Inc. in Minneapolis as the morning show producer, Amy made her way back to St. Cloud and Leighton Broadcasting where she became co-host and producer of the morning show Matt and Amy in the Morning - a show that ran (and gangbusters, I might add) consecutively for 12 years.

Today, Amy is the Operations Manager in Winona and midday host and PD of KRIV-FM (101.1 The River) and oversees all on-air programming and promotions for our five-station cluster in that market. "I always said if I wasn't in radio, I'd want to be a teacher," Amy said. "Now in my role, I get to teach radio. When it came to Rising Through the Ranks, there's this common tale across all of that there's a gap in communication between sales and programming and here, I'm trying to be that bridge between the two. Let's do really great things on-air, and let's have it make sense for the station and generate revenue and success for our clients."

(Call it serendipity, but I sent the link to apply to Through the Ranks to Amy nearly simultaneously when Matt Senne sent it too.)

Amy followed our encouragement and applied for the program and was selected to represent the 2018 class. Amy talked about her experience and how the opportunity was presented to her and others immediately once they were all gathered in Nashville.

"As women, sometimes we get in our own way. We don't believe in ourselves or pursue what we think we could or deserve. The intimate, female-only setting is intentional for Rising Through the Ranks; they want to keep it a safe space to be vulnerable and say what you want to say. It's not about men not having the opportunity; it's just the simple fact that having men present would change the dynamic of women speaking freely."

Five Rising Through the Ranks Questions with Amy

What sticks out the most from your experience? They [leaders and mentors] always emphasized if you're here, you're meant to be here.

What was it like being alongside some of the nation's brightest radio stars? There was so much positivity, boosting, lifting each other up - it was nice to have exposure to people from all market sizes and geographical areas too. They told us if we stated we were from small markets, we don't want to hear anyone here downplaying their role or career because you're from a small market; you're from a strong, local market and you're essential to this industry. It was perspective.

Now that you're back ... what's your first step? Rising Through the Ranks was like drinking from a firehose. I had to make myself not dive into everything over the weekend immediately when I got back. We were coached that yes, you can implement everything, but over time. Not in a week or month - or even a year. Start slow, be intentional, be patient.

What breakout or topic most resonated with you? "How Everyone is in Sales" - creative, on-air people might not always make that connection but really, that is what this business is about. That's what I'm choosing as my starting point for our team.

When I ask you about your future, what first comes to mind? It's filled with opportunity. Probably more than I ever thought - I never saw myself as a manager early on in my career and I also thought there was an age limit in this business. especially when it comes to being on-air. I used to think, are there any 55-year-old women on the radio? It's not like that for men. Can this be a lifelong career? I'd start to panic as I matured and gained experience thinking I'd have to give this all up. But now I know I can be on-air. I can lead people. I can do anything." 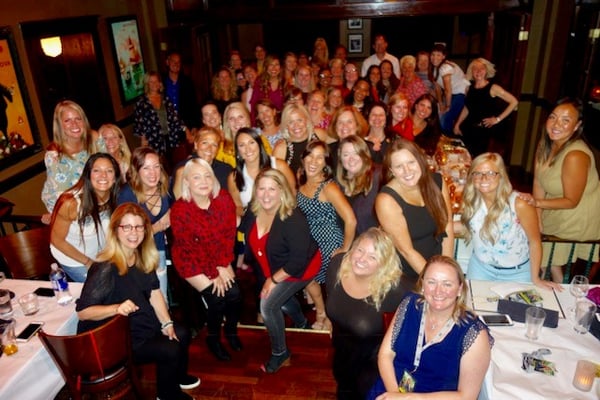 Kalie Schuster says she accidentally fell into the radio business.

During college at St. Cloud State University, she was a member of the American Marketing Association. The club's executive board urged its younger student members to find an internship to vamp up their resumes and set themselves apart from job competitors. Kalie followed the advice - and the internship route - and found a spot on Leighton Broadcasting's sales team her sophomore year in 2012.

From there, what was an initial 90-day internship morphed into an extended stay offer, and then to a sales apprenticeship where Kalie spent her senior year under the tutelage of Denny Niess, Vice President at Leighton Enterprises. "That's where I fell in love with my job. I had a sort of connotation about sales - but what I learned was so different. I thought to myself, oh I get to help people with their marketing strategies - I get to be creative, generate ideas - and yes, radio is very fun." When Kalie graduated from SCSU in May of 2014, a full-time AE position was waiting for her at Leighton Broadcasting.

Kalie shared what makes radio - and our company in general - such a great fit for her. "Within six months of my career, I began to see how my role as AE fit into the bigger picture here. I can completely invest in myself. There's so much opportunity for growth and professional development with everything Steph brings to our team - whether it's the Wizard Academy, Caffeine & Coaching, and now Rising Through the Ranks.

Five Rising Through the Ranks Questions with Kalie

This year wasn't your first application with RTTR - how did you approach this year? I applied for the scholarship in 2017 but wasn't granted it - our team members Allison [Lightfield] and Kelli [Frieler] were awarded scholarships and attended. I'm competitive - that's not to say I'm not supportive because I am and was very excited about their opportunity. It just lit a little fire under me. This year, I was more clear about my vision and where I want to go in the next three-five years.

What speaker presentation did you look most forward to? Val Maki's Having Difficult Conversations. I personally think the topic is a weak point for me. I can let emotions take over in those situations and not handle difficult conversations to the best of my ability.

What did you gain from the other 20+ women in attendance? Just having access to that network - they all come from my industry and this business - and being able to learn what obstacles they have, and how they handle the same things I'm faced with. Big markets, small markets, and everything in between. We're more alike than we are different and it was refreshing to talk about common themes. I loved being surrounded by like-minded, supportive women for three days.

What single word would you use to describe Rising Through the Ranks? Emotions. I do a lot of networking and belong to groups - like Chamber - and it's common to gravitate towards familiarity and people you already know. There's comfort in that but it doesn't stretch you or grant you an opportunity for growth. RTTR meant getting comfortable with being uncomfortable. I had to meet everyone. Everyone was so approachable and friendly and just interested in getting to know one another. And yes, it was emotional for me to be in that setting with those women and be able to share my story and my vision of I want to be where you guys are in 10 years. This is the path I want to be on.

How do you see RTTR shaping your career? I was a soaking-wet sponge from the seminar experience. I have a giant binder filled with action steps, plans for implementation, and a big list of goals - there's 20 on my list! One of the leaders told us to pick one initiative a month - Rome wasn't built in a day. Remembering that slow and steady will be the most effective and impactful in this company and for my own growth. I feel that I have more self-confidence now, that's 100 percent true.