One of the age-old mainstays of advertising, radio has controlled a significant portion of the market in the United States since 1922. In the near-century since the start of paid radio ads, the industry has maintained a stronghold in the world of media, connecting listeners around the world with music, talk shows, marketing messages, and more. But with the rise of digital tactics, some might claim radio is too old-school to appeal to modern consumers.

My answer, without hesitation, is no, there's nothing old-school about radio. While radio has evolved over the years, from traditional AM/FM programming to digital alternatives such as Pandora or Spotify, listening to music and news is still a central and habitual part of daily American life. For small businesses seeking affordable paths to advertising, radio still has plenty of potential ... and plenty of relevancy. Here's how. 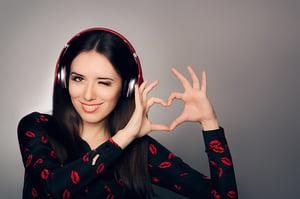 People of all ages, backgrounds, and interests love music. It's the world's one great unifier, and it's omnipresent. In your car, while you’re shopping ... it’s the one medium that reaches out day and night where listeners live, work, and play.

If you've ever asked yourself "do a lot of people listen to the radio still?" you may be surprised to find that the answer is almost everyone listens. Over 90 percent of Americans above the age of 12 turn on the radio at least once a week, and an average listener spends 13 hours tuning in on a weekly basis. 61 percent of Americans have turned to online radio, listening to online AM/FM stations, or streamed content service at least once a month.

As far as advertising is concerned, radio promises big gains in exchange for a small investment. In fact, in the latest Nielsen ratings, 87 percent of people spend their time on their three top stations.

Psychologists tell us that consumers need to be exposed to an advertising message at least three times before it begins to resonate. When businesses review their advertising and take this factor into account, radio is one of few mediums to choose from that offers an affordable, repeat-ad plan.

Brand recognition is fortified with radio advertising in ways other mediums just can't compete with. 271 million people over the age of six listen to the radio every week. Frequency is a specific component and kind of "secret sauce" when it comes to the principles of media advertising and is unparalleled anywhere else.

The costs associated with advertising on the radio have grown less than other common forms of advertising. Newspaper advertising rates continue to climb as circulation for printed newspapers has fallen. Television commercial rates are costly and run the risk of being unseen as more viewers record shows on DVR just so they can skip the commercials.

Pinpointed advertising on the station or stations that best match your customer’s interests is like serving them their favorite meal at the time they expect to eat and that targeted effort can save you dollars. Even with all of these proven reasons, the method you will choose will depend on a number of factors – who your target audience is, and what your budget will allow.

Due to the targeting potential in radio, from access to the local community to the ability to address very specific submarkets using individual stations, a well-crafted radio message can provide the insight necessary to reach the right listeners - the individuals who likely will become customers. Once you know whom you're talking to, it becomes much easier to determine an authoritative, trustworthy way to communicate.

Here is a customer success story on how our client, Bursch Travel, reaches its audience.

In the truest sense, radio is quite visual, both figuratively and literally.

In a figurative sense, a creative use of sound effects, voices, music, and commentary can paint a mental picture much in the same way a great piece of writing can trigger vivid imagery with nothing more than words on a page. With the right approach, radio advertisers can show, not tell, utilizing similar narrative techniques to influence consumers.

More literally, radio's evolution into a digital experience provides plenty of opportunities for colors, pictures, and video. On many online listening radio apps you're greeted with video upon arrival and display ads throughout your listening experience, providing a balance between audio and visuals. This opens up new avenues to advertisers, combining all of the power of radio with the added benefits of visual content marketing, such as increased retention of information.